Possibly the best bull we have ever bred. He is a polled bull with great bone, constitution and perfect structure.   This bull has real x-factor and we are so fortunate to have such an amazing sire in our herd. The quality of his progeny is just awesome! He has over 50 daughters in the herd and it doesn’t seem to matter whether cattle are sired by Evolution, sired by his sons or even out of his daughters, they are all just exceptional cattle. The Australian and Canadian semen rights have been sold. Semen is now available for the USA. 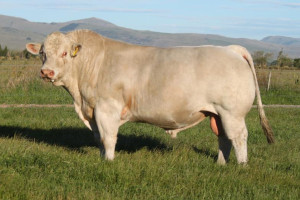 A few years back we sold a bunch of Silverstream Enticer sons which were extremely popular among our commercial clients. We thought Geddes was the best Enticer son and saw an opportunity to breed more cattle like his sire did. Geddes is breeding better than his sire. His progeny are really meaty and wide with plenty of depth and bone with great thick coats. Geddes is a bull with so much power, class and style. The global semen rights of this bull have been leased to Semex. 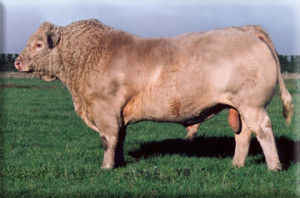 Performer is an outstanding full French sire who has set the standard for all others at Silverstream. In his prime Performer was one of the most awesome individuals you would ever see. He had a tremendous head, outstanding thickness and great legs and feet. Performer had the X-factor presence that all great breeding animals possess. His legend gets stronger by the year as more and more breeders from around the globe recognize what a great bull he is. He has been widely used in Australia and now in Canada.

This bull’s pedigree is hard to beat with Glossy S120 on one side and our best cow Chandler R111 on the other with three top French sires Indiana, Exclusif and Ijoufflu there also. Frampton has the most exceptional growth on a moderate frame. He carries his weight in his length and width and he is passing this onto his progeny who consistently weigh like lead. He is a powerful sire with an extremely strong sires head and awesome strength of bone. We kept Frampton for his explosive growth and performance and believe his sons will go on to produce top steers. We love putting Frampton over polled females and getting polled daughters with real strength and performance.