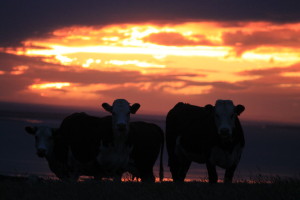 In 2012 we began our new venture of breeding horned Herefords. The stud was established from cows that came from Anna’s parents stud.

Anna’s parents began the Na Puteputi stud back in 1968 and had been selling bulls locally in the Hawkes Bay in the North Island of N.Z. When they decided to wind down the stud due to retirement we began shipping the cows down to us in the South Island over a period of 3 years. We now have 60 registered cows. There are only a handful of horned Hereford studs left in N.Z so we have decided to keep the cattle horned as there is a demand for them. Our first line of bulls sold in our 2014 bull sale. Many sold to new clients while others went back up to the North Island to existing Na Puteputi clients.